Welcome to Stowe, Vermont, nicknamed “The Ski Capital of the East.” Hayward’s New England Gazetteer of 1839 praised the area, noting this valley contains some very beautiful and productive farms. Between five and six thousand sheep are kept and the exports of agricultural products are valuable. Stow is a flourishing town and contains a neat and pleasant mountain valley village.

The Akley Building Town Hall, containing the Post Office, was built in 1902. Six years later the Post Office was robbed—the robbers blew up the safe and stole $500 in stamps, postal funds, and money orders. Today, you can still see a bullet hole across the street from the Akley Building on the facade of Shaw’s General Store building.

Skiing was introduced to the residents of Stowe in 1913 when three Swedish families began traveling around town on long wooden boards with upturned ends. This pivotal moment in our town’s history marks Stowe’s transition toward its true destiny as a skiing capital. 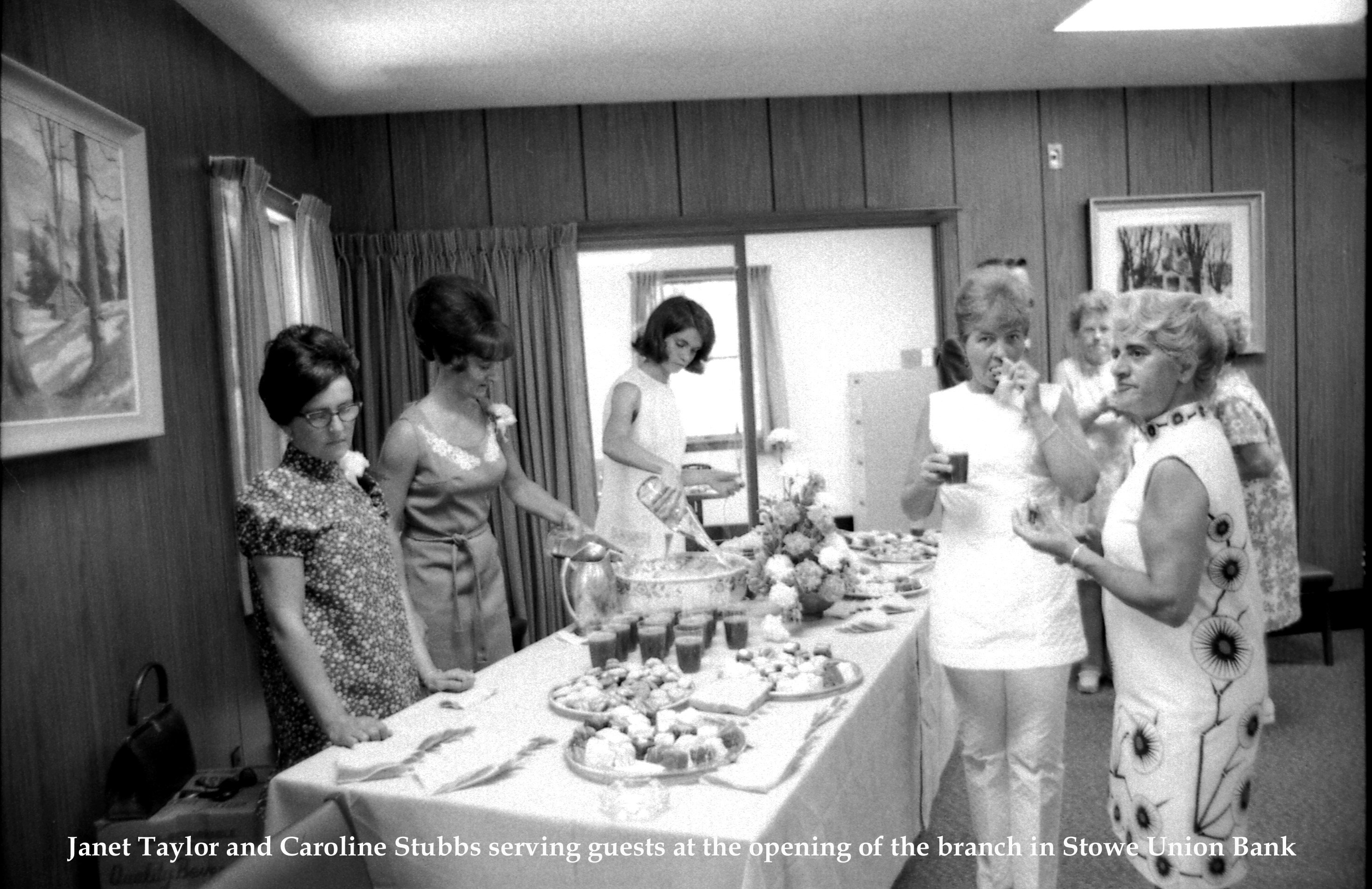 The Stowe branch was one of Union Bank’s first expansions beyond our original Morrisville location. When it opened a century ago, Stowe had a population of approximately 1,900 people and Charles H. Stearns was President of Union Bank. In the 1970s, Union Bank’s Stowe branch moved to a new facility on Park Street, where it remains today.

In celebration of a century of community banking in Stowe, we talked to a few local Union Bank customers about their own histories here and what they love about the Stowe community.

Leighton moved to Stowe with his college roommate in 1969 and fell in love with the beauty of the place. Over the years, he’s watched the area become more developed, from a winter-only resort town to a residential area with more homes and developments.

The strong sense of community and outdoor activities are Leighton’s favorite things about living in Stowe. From snowshoeing and collecting firewood to hiking, bird watching, and even “mud season” with its promise of spring just around the corner, Leighton enjoys every opportunity to get outside.

Here in Stowe, Leighton says everyone will show up for you if you need them. You are likely to run into someone you know anywhere you go. There are plenty of opportunities to serve the community. Leighton is head of his home owner’s association, Stowe’s moderator for town meeting, a justice of the peace, and member of the Board of Civil Authority.

Of Union Bank, Leighton says it has been a great asset to the community. He’s been a Union Bank customer since 1972 and appreciates the fact that he can still call the bank and speak to a real person.

Barbara is a lifelong resident of Stowe with 90 years of history here. She has worked for the town throughout her career and enjoys community events like the Veterans’ breakfast and Memorial Day parade. Barbara is also a member of the local historical society and the American Legion Auxiliary.

Of Union Bank, Barbara says she appreciates the nice people and helpful nature of the service. There is fun vibe in the Stowe office; you can joke around and be friendly.

John has lived in Stowe for the past five years. He owns the Stowe Public House & Bottle Shop and gets involved with the community through coaching the high school boys’ basketball team. As a local business owner, he thinks the renovation of the downtown area is a big positive for the community. It feels more vibrant now, with new shops and increased foot traffic.

John runs his businesses with the help of Union Bank and appreciates the welcoming atmosphere the branch employees create. He says they always reach out and help whenever he needs anything.

Olivier moved to Stowe in 1994 and raised his family here. He was also CEO of The George Adams Company, one of the last manufacturing companies in the area.

You must be an outdoor fan to live in Stowe, Olivier says. He enjoys skiing and is passionate about hiking in the mountains every weekend. Olivier appreciates the small-town feel here; it’s like a village but there is also plenty to do.

When it comes to community involvement, Olivier is involved with his local church, as a chair member for the zoning board, and with the Catholic schools that his children attended.

Of Union Bank, Olivier says bank employees take care of you in a personal way. In a world where banking is mostly impersonal and fee-based, and decisions are made by others on the other side of the country, it’s nice to talk to real people who care.

Join us in celebrating a century of service in Stowe. Stop by the Union Bank office on Park Street to say hi and tell us what you love about living here. We are here to meet all of your personal and business banking needs with friendly and convenient service and a complete suite of modern financial products and services. Here’s to another century of prosperity and community in Stowe! 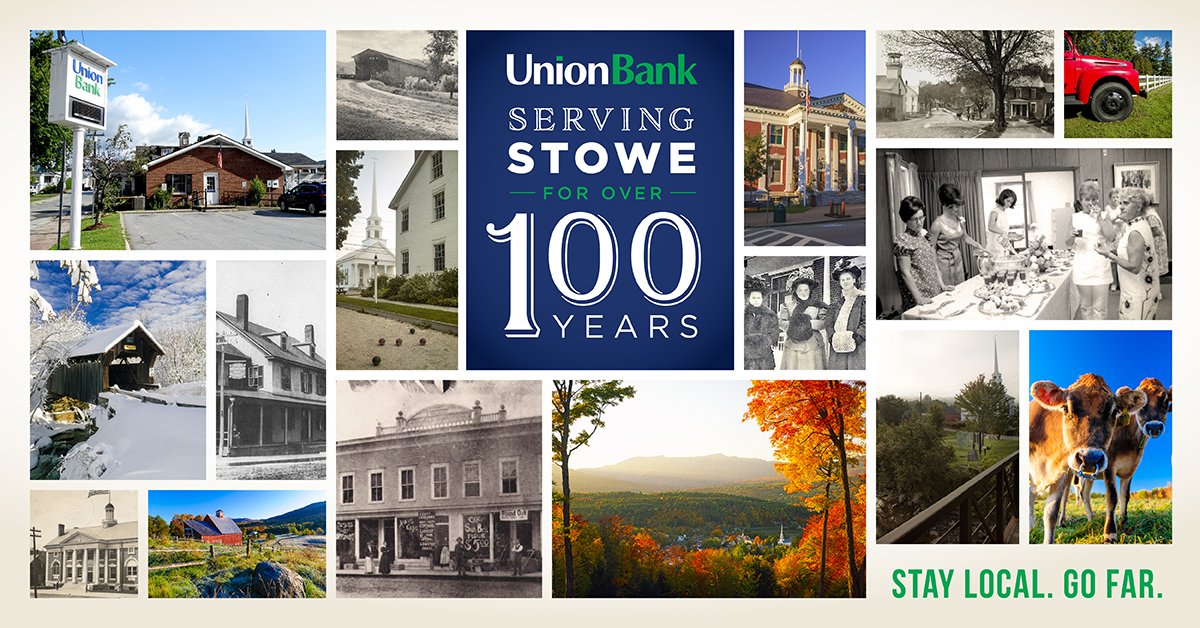