Technology advances, new industries replace the old, and towns change accordingly. In Northern Vermont, the Lamoille Valley Rail Trail is an example of positive transformation. The landscape may look different, but the community that binds people together is as strong as ever. As a community bank since 1891, Union Bank is excited to support this important project. The LVRT is a multi-use, all-season trail for the public’s enjoyment. It will give neighbors, families, and friends a new place to gather, and will attract tourists to our beautiful state. Currently, one-third of the trail has been completed (including 15.4 miles between Danville and St. Johnsbury and also 17.4 miles between Morristown and Cambridge) with help from federal transportation funds as well as local support from individuals and businesses. Eventually, the completed trail will span the length of Vermont in a Northwesterly trajectory.

How The LVRT Benefits Local Communities

The Lamoille Valley Rail Trail is one of the most ambitious projects of its kind and the longest rail trail in New England. When you think about it, it’s amazing and inspiring that so many communities across Vermont were able to come together to collaborate on a rail trail for the whole state to enjoy. Community participation will continue to be an integral part of the trail’s success as volunteers help with maintenance.

Besides the benefit of strengthening individual communities and their bonds with other residents of Vermont, the LVRT contributes to economic growth in local communities. Jobs are created to build the trail, and trail users will bring new businesses to the restaurants, stores, and hotels that are located on or near the trail in towns it crosses through. Besides local trail users, the LVRT will be a new attraction for visitors, contributing to Vermont’s tourism industry.

Perhaps the most impressive feature of the LVRT is its year-round use. Some local residents even use the trail to commute to work. In spring and summer, trail visitors can walk, jog, cycle, or ride horses on the trail. In the fall, it becomes a great place to enjoy the state’s famous foliage. And during the winter months people can use the trail for their favorite snow activities from cross-country skiing to snowmobile riding. The LVRT never closes, creating a four-season attraction to draw people to Northern Vermont and its communities. Trail users will be awed by the gorgeous Vermont scenery all year round, including some views that have not been accessible to the public in a long time.

As of 2017, 33 miles of the total 93-mile LVRT are open to the public. The trail is divided into six sections and the first two were completed in 2015: 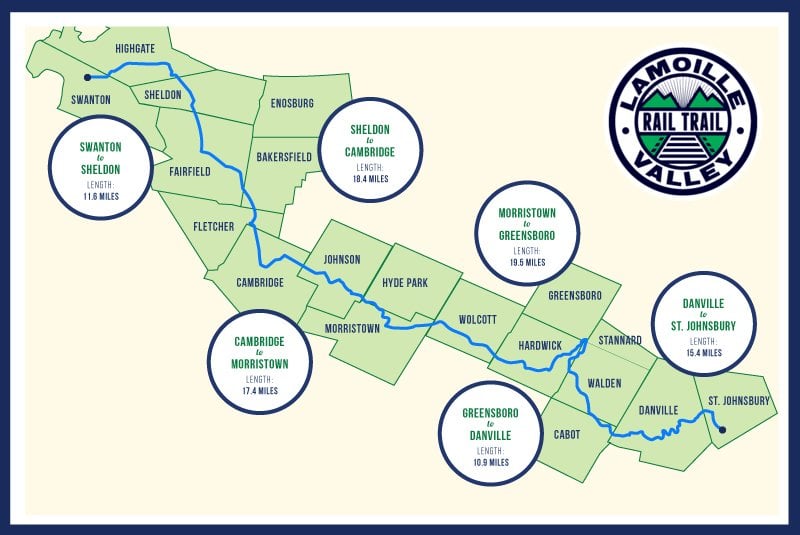 More than seven million dollars has already been invested to build the first two sections of trail. The Vermont Association of Snow Travelers (VAST) has launched a capital campaign to raise $3,000,000 in private funds for the completion of the trail. That money, in combination with additional federal and state grants, will enable the LVRT to stay on track for completion in 2021.

How To Get Involved

For more than a century, Union Bank has invested in your community. That’s why getting involved with the LVRT was an easy decision to make. Our gift to the LVRT Capital Campaign will support all of the things we love about being a community bank. The LVRT will increase quality of life for local residents and contribute to economic growth in communities along the trail. We hope you’ll join us in supporting this wonderful project. Visit the LVRT’s website to get involved by volunteering, donating, or visiting the trail. This is a great way to involve yourself in local matters that have a direct and positive impact on your life and community.